A question about sleep

As many of you know, my symptoms have been well controlled since I began taking Mexiletine in summer 2015. Nonetheless, there remains one area that is especially problematic and I was wondering if anyone else experiences something similar.

Now again, I have symptoms primarily in my knees, which I know doesn’t translate directly to most here. However, the issue I’m curious about relates to sleeping.

I am fortunate enough to be able to sleep largely undisturbed most nights. When I lay down at an appropriate time, sleep 7-8 hours, and don’t get out of bed, I am perfectly fine. An issue arises, however, if my sleep cycle is disrupted.

For instance, if I am jarred awake after a few hours and have to scramble out of bed, upon standing my knees will turn red, warm, and feel like they’re going to explode. This is not present upon first waking while still in bed and only occurs once I stand upright. It lessens and dissipates if I am able to return to a vertical or seated position. The best solution is to simply return to bed and go back to sleep. It basically makes standing untenable.

Something similar occurs if I take a midday nap. When I wake from one, my symptoms often flare a bit before they settle back down. Thus, I’ve found sleeping in a 7-8 hour block without getting out of bed to be my best bet.

Has anyone else found that a disrupted sleep cycle exacerbates symptoms?

I haven’t noticed if interrupted sleep aggravates my EM, but I do have worsening symptoms when I get out of bed in both my hands and feet. I’m not sure why. For my hands, I think the pressure from sleeping may aggravate them. My feet are always very raw in the am, and it is very painful to walk first thing in the morning or if I awaken at night.

What does “raw” mean in that context? Are they sensitive to touch? Can they not bear weight? Does the skin feel like it has literally burned? What does that mean?

Sorry for lack of a better word. It just feels like a bad burn & I was beat on the bottom of my feet while sleeping kind of? They get very tender and it hurts to walk on them…often red and kind of swollen on soles…but it’s not a flare per say…more like a healing injury…so yes, sensitive to touch, walk on, etc.

I don’t know if that helps any…

Definitely helps me understand it better. I thought maybe that’s what you meant, but my experience isn’t like that and wanted clarification. I’ve never had swelling. My symptoms are more transient. The skin can turn red, hot, and be uncomfortable, but then can go away like it never happened. Typically when I first wake up my knees look entirely normal. Though prior to taking Mexiletine it was more a constant flare cycle.

Past weeks have been bad. I try to wear lose boots after a snow fall. Cold alone I’m good in open sandels. I can walk on packed snow no problem, But wet snow or slush stings.
Elis

The change in posture will lead to the knees being more noticible: Notice the concentration and splitting of not only the femerol artery at the knee but venous structure: 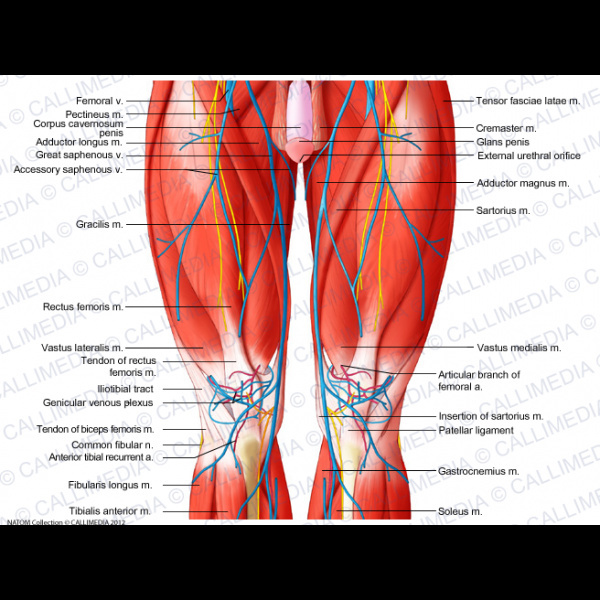 Do you sleep with your knees bent? I’m wondering if circulation is getting cut off by the bent knee and then when you rise and stand its flushing into the knee joint. I am a side sleeper. On fact a post soon will be about that problem. But I sleep with knees bent. I don’t have redness is my knees. I have excruciating pain at night in my knees. But no redness or hot. I have it in my feet and hands. My feet will wake me or keep me up and my hands. As soon as the heat starts in the feet of I get up I stand in floor so it makes it better. Rising or sitting makes no difference for me. But I posted a few days ago I did see a white circle on bottom of heel when I stood up and it went numb. Strange things seem to occur all the time. I always just assume it’s the lack of blood flow or too much blood flow. But being in bed if no red hot until you get up that makes me think the blood flow from standing up goes faster… Or your cortisol levels rose…

That sounds dreadful. If I’m in freezing temperatures I have to keep warm, per normal. Earlier this year a storm dumped 2 feet of snow on us. I shoveled snow during it without wearing appropriate attire and ended up with the beginnings of frostbite. When my hands and feet warmed up they were quite painful, way worse than anything I get from my EM symptoms.That was a stinging pain that was quite different. Even before I was medicated, when my symptoms were worst, they rarely ever rose above the level of discomfort, which I could put ice on and neutralize fairly easily. On a pain scale of 1-10 I tend to view 1-3 as annoyance, 4-6 as discomfort, and 7-10 as pain. My pain never really got much above a 5 or 6. The frostbite pain was more like an 8. It was outright pain, above just the level of discomfort.

Your idea is something to consider. I am an eclectic sleeper and don’t have any one dominant position. It’s possible the variation for why it sometimes occurs is due to knee position. I can say it occurs most frequently when I sleep on the couch or take a nap, which tends to be consistent with a more bent knee position.

I can relate to the icy hands and feet feeling and the stinging. Yup that happens to me. It’s really about every individual finding what works and whose t doesn’t I think. I’m usually the only one on a short sleeve with her window half down cruising along in ten degree weather while others are bundled up with hats and scarfs and gloves. It looks a bit ridiculous but I leave all bundled up. The peeling starts as soon as I hit the drivers seat… Then add it back on just to leave the car and get to the doors. Just to peek it all off. Oh such fun times!

my hands and feet warmed up they were quite painful, way worse than anything I get from my EM symptoms.That wa

Hey Carter - I can relate to your post. I’ve found I provoke a flare less when I slide out of bed into a sitting position on the ground then move into a standing position.

For whatever reason it makes a big difference, give it a shot.

I rarely have problems when I first wake up in the morning after a full nights rest. It’s only if my sleep is fragmented or I take a nap. I’ve had good success lately waking up in the morning and cycling for an hour on my exercise bike. If there is any issue, that seems to work it out.