Can any relate to this? Is this EM or Raynauds? No doctor seems to know

Hi there. I am a 25 year old male and for around 3 years I have had a number of strange issues. It first began with neurological symptoms (ataxia) which to this day are still undiagnosed. I then began to experience burning and redness in hands and feet which progressed significantly in terms of severity. Interestingly, when the symptoms got at there worst I began to go into remission for weeks at a time and then months. I would go weeks without having an episode but then have a really bad relapse with several weeks of daily attacks. Triggers are standing and things like warm showers etc. Sometimes, attacks happen with no trigger at all. Many doctors have been completely puzzled whilst others have called this Raynauds (which i personally disagree with). Can anyone relate or provide insight from their experience? 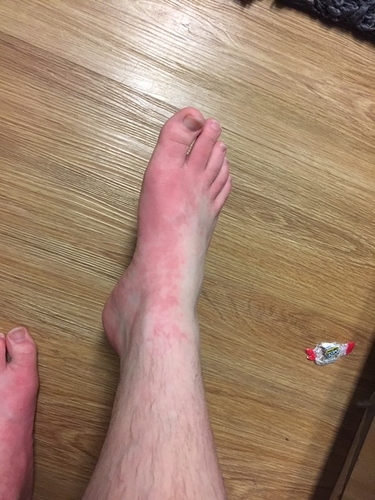 That looks like erythromelalgia to me. My feet used to look very similar to that after a hot shower. What I find has helped me the most is keeping my feet warm at all times so that might be something to try in the meantime. Raynaud’s and EM both result from microvascular instability and vessel spasms so they are not entirely wrong. What I would look into if I were you would be to get autonomic function testing and a small fiber neuropathy test as you also have other neurological issues and they could all be stemming from the same issue. The fact that your EM symptoms wax and wane is somewhat relieving as many just continually get worse once symptoms start. I would follow up with your primary and ask them to look into ruling out potentially secondary causes.

I agree with Joe’s assessment. That blotchy redness looks exactly like my own erythromelalgia symptoms when they occur.

Looks like EM to me as well. Do you have other symptoms? Are they (very very slowly) getting worse? It might be Lyme disease, that’s what was behind my EM, Raynaud’s, SFN, POTS, and more. Took a decade for my symptoms to get really bad. The last four years of that was when the EM popped up. Things got so bad I could barely stand or walk. That’s when a friend suggested I consider Lyme disease, she had a cousin with similarly bizarre symptoms. The more I investigated Lyme online, the more it looked like that is what I had.

I’d been tested for it twice and was negative so it was ruled out. The ELISA test doctors rely on (following CDC protocol) is notoriously poor, has many false negatives. When I finally found a doctor that was Lyme literate (LLMD), she tested me using IGeneX tests and a CD57 test (a marker typically low in Lyme patients). A month later, my test results showed I was positive for Lyme borellia and I had very low CD57. I found my LLMD by filling out a form on the IDSA web site, a society of Lyme literate medical professionals. I’ve been getting treatment for three years so far and feel a lot better, though I still have some symptoms like sore feet.

Stay away from CDC and IDSA web sites. They are very wrongheaded about Lyme and are the reason it’s been pushed under the rug for years and years. They claim Lyme is easy to detect and easy to treat. Couldn’t be more wrong about that as when Lyme goes chronic few test positive on the ELISA and by then can take years to treat.