Does anyone else suffer with Erythromelalgia and Raynaud's?

I was just wondering if anyone else suffers with both EM and Raynaud's.. and if so have you ever had a double flare up of both at the same time?

This is a pic of my lovely purple feet (Raynaud's) and my even lovelier red legs (EM) taken earlier this afternoon at the start of both flare ups... chuckles 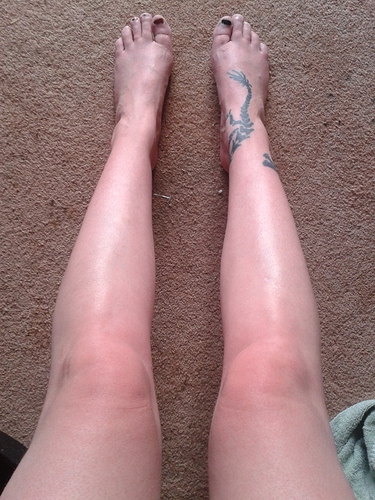 I have both and yes, I've had both flare at the same time but often when I'm changing temperatures or had my feet still for too long.

I also have Reynaud’s and Erythromelalgia along with Nail Patella Syndrome.

I too have both conditions ... I was diagnosed with Raynauds 4 years ago and only recently have now been diagnosed with Erythromelalgia .... I thought I was going insane ! ..... How can one side of my foot be flaming hot to the touch and bright red and the inner side of the foot and the 2nd toe and big one look and feel corpse white and freezing??? .... How to heat one side and cool the other !! ..... The skin on my feet is becoming tough and unforgiving even though I smother them in creams and wear 100% cotton socks ..... Each time I have a flare depending on how swollen they become the skin cracks .... I am spending a lot of time laying on the bed with my feet above my head during this hot spell of weather with the ceiling fan on ..... To be honest I'm sick to death of it !! ..... I am 58 and worked all my life, not out of necessity but I love to be constantly on the go ..... This has knocked me sideways to be truthful .... I can ignore the pain and work on but then my feet and legs go numb but the pain dissipates a little !!! .... Is this a good thing or a bad ? .... I just have two dead lumps below my knees ... I definitely have to stop when pain travels into the back of my left thigh .... Can anyone tell me if ignoring what can only be described as like walking on hot coals/molten lead to increasingly numb feet/legs harmful ? Sorry I've rambled on too long ! .... Really hope I get a couple of answers though ! .... Bye for now take care and keep smiling !! xxx

I haven't been diagnosed with Raynauds but had couple of drs say it is highly possible. I get severe pain in the cold then bounce to an EM flare as soon as I warm up even slightly.! I have seen others on here say that they have both, not sure what percentage of EMers also have Raynauds tho.

yes I have both.tried many diff meds.not one have helped yet because I have both,you have my sympathy its drives me insane at times xx

I have been diagnosed with Primary EM with a bit of underlying Raynauds thrown in for good measure. This was discovered during a thermal imaging test when both my feet were on fire but one foot was measured at 35degrees and the other at 23degrees. The chap doing the test said he had never seen this before during an actual test so I think I made his day!

The Em is the major problem with me. Wish my legs looked as good as yours do despite your obvious problems. Mine are now just shapeless discoloured appendages and the feet - well - let's not go there. It must be very frustrating for you trying to get the balance right.

like the photo ha ha. talk about two extremes!! I definitely believe you can have both conditions whether separate occurences of each or together. I have had episodes where one hand is hot, red, veins bulging and the other is a mottled purple colour and cool. particularly if I have been holing a cup of tea for example. (As I may have posted before I came across the term erythromelalgia, I had described my symptoms as 'like having my reynauds phenomenon in reverse). it really is an extreme hyper-sensitivity to temperature

Yes, like you and others who have commented, I've had both Raynaud's and EM. At times some of my toes are blue and cold while the other toes ON THE SAME FOOT are hot, red and painful, very weird. I have had a lot more issues with EM lately than with Raynaud's though. They're both neurovascular conditions which are frequently associated with autoimmune diseases so it makes sense that we can have both at the same time, I guess? Have no idea why a doctor would say it's not possible to have both.... clearly that is not the case.

Despite the rainbow going on in the pic you have lovely feet despite it all may I say!

Anyway, yeah I get both too but mines is more like in the same area, the foot is blue (raynauds) feeling sliced and diced, raw, heavy, numb and what I can only describe as a popping candy like effect through-out the top of my foot! :-). Then in the middle of my foot is burning red- the EM patch/patches and this can last a good while.

Before raynauds was suspected I described this as my “worst kind of flare” as it was more than the average EM one this felt so much more raw. I wouldn’t know about my legs, they are always blue anyway!! LOL

I get flares ups with the EM on legs, feet, hands, arms and face now... looks like I have been under the sun lamp for too long... shame it doesn't turn brown really.. would look like I had a nice sun tan LOL

I too have both. It is a fine balance which is almost impossible to treat with the usual remedies since trying to warm up the icy feet just creates and flares up EM........ Both are painful for me though I guess I would prefer the Raynaud's if I had to chose one. My doctor said he has one patient where the EM seemed to burn itself out (if there is such a thing) and is left only with the Ray's. If you have any tips on how you deal with this I would love to hear more.

I just ride it out.. as painful and hot as it may become and yes I would rather stick with the Raynaud's as it is more bearable to deal with lol

I too have both. It is a fine balance which is almost impossible to treat with the usual remedies since trying to warm up the icy feet just creates and flares up EM........ Both are painful for me though I guess I would prefer the Raynaud's if I had to chose one. My doctor said he has one patient where the EM seemed to burn itself out (if there is such a thing) and is left only with the Ray's. If you have any tips on how you deal with this I would love to hear more.

Hi guys! I have both as well. I agree, crazy annoying to have one foot what I call ‘dead Barney purple’ and the other on fire with cracked skin and even blisters.
Actually just got out of the hospital days ago from a week long stay just to treat my EM pain (ketamine IV). I know that stuff is heavy and NOT good, but my pain was just insane.
I took the vaso dialators to get the circulation going to treat my Ray, but then my EM pitched a fit, so I stopped. I’d honestly rather have cold numb feet and legs over fire.

What is Nail Patella Syndrome? I have both along with other autoimunne.

I also have Reynaud's and Erythromelalgia along with Nail Patella Syndrome.

NPS is genetic disorder that features abnormalities of the nails, kneecaps and hips. Reynaud’s is sometimes present with NPS because of connective tissue disorders or circulatory problems that are due to NPS.

Thanks Linda, I have connective tissue disease, Raynaud's, EM, and probably Sjogren's. I will ask my Rhuemy about NPS. Is there a test to determine if you have it?

NPS is genetic disorder that features abnormalities of the nails, kneecaps and hips. Reynaud's is sometimes present with NPS because of connective tissue disorders or circulatory problems that are due to NPS.

Hello. I too suffer from both. I also get pernio in my feet. I always drive barefoot because either my feet are burning and I’m trying to cool them or they are so numb I can’t feel the pedal unless I use the arch of my feet. I have had my hands burning but a few finger tips with reynods. My mom came up with the great idea of cutting the finger tips off a pair of gloves then I only put them on the tips of the numb fingers.it doesn’t quite make it go away but is does help a little.my doctor at mayo said I have some sort of Neuro vascular instability. People always say why can’t you just exercise or work someplace cold but as you know it’s not that easy. I describe it as walking on a tight rope all of the time.
Take care, Alina