i was told effexor would help me veins be ‘less jumpy’ which thrilled me. i wasn’t told anything about cymbalta but i know it is in the same class.

my derm and i don’t communicate well. and we are both frustrated. i feel he is just throwing cymbalta at me … to hopefully relieve some depression and pain and basically keep me out of his office. even his doctor notes to my family doc simply said ‘cymbalta for raynauds’. it’s leads me to believe he is done trying to even treat the erythromalelgia. 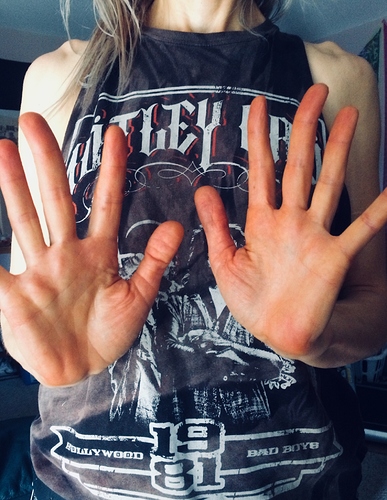 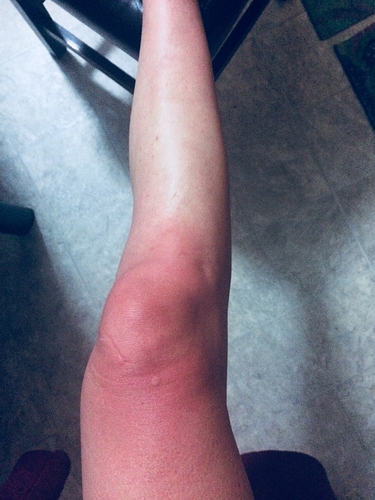 “Vasomotor” refers to actions upon a blood vessel which alter its diameter.

better explanation than my doctor and pharmacist combined.

I take Duloxetine, I find that while it helps my depression, it does nothing for my EM.

i am hoping to try effexor again on a small small dose. it seems the only anti d to help with vasomotor issues so i’m trying t again. i have never tolerated why anti depressants tho…

I use 37.5 mg of Effexor and while being a low dose it helps with my anxiety and I think it helps my vessels.
I also take cytotec that helps with the vessels too.
Good luck! I liked cymbals 30 mg too but switched for the vessel issue.

i’m working up to 37mg to try and avoid side effects i had when i tried it before.

my flares have eased up within the last 2 weeks. i’m not sure if it’s because i’ve added more fat to my diet, the ketamine cream or the thc oil i’ve used. i wish i knew what has made the slight difference. i was so desperate with such painful, frequent flushing that i tried everything all at once and now i don’t know what is working. i’m grateful tho!!

cherry,
I just saw my derm last week or so and she changed me from Cymbalta to Effexor. I was on Cymbalta for a few years at least now due to nerve pain from my neck, however that being said it didn’t help with my EM so she decided to switch it up and said maybe because i have been on it so long that maybe it just its working for me anymore. my veins dnt jump but they bulge when i start to flare. If i get hot my entire chore starts firing like shocks all over. I really hope that the Cymbalta helps you. Did your derm also put you on aspirin with it. 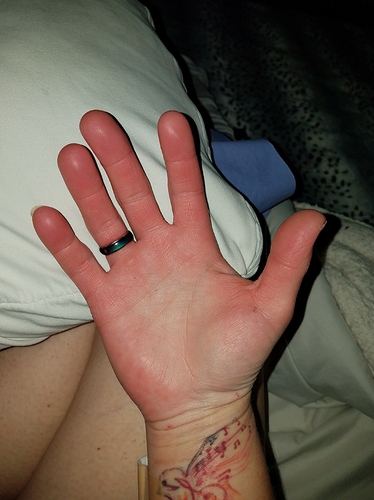 Cherry i can relate

i can’t believe you still wear a ring. i panicked as soon as i saw that!!! i have such a fear of swelling and being stuck !!!

thanks for sharing
are your children showing symptoms? my son has red ears at the oddest times but he isnt complaining of pain… i just hope

Cherry,
Ya I still have my rings on but when I flare there is nothing getting them off for sure sometimes I have to take them off becasue it becomes to painful. Funny you asked if my kids had symptoms my oldest just turned 20 and she also has had symptoms since she was about 15 but back then we had no idea what it was her knees become super red and her feet also. Now that I know about EM and have been diagnosed im certain that she to has it. So far none of the other 3 have symptoms. I hope that they dnt get it. Its hard enough dealing with it but to know your child is also suffering with it is even worse.

I have been on cymbalta, then tried Paxil, then gone on to effexor, then tried zoloft, then back to cymbalta. I thought I’d share my experience here.

In the beginning I didn’t think cymbalta was working at all for me. I would take it at night. However looking back, I think it helped me be more functional during the day. The next night, I don’t think I had enough cymbalta in me and maybe my declining levels would fuel bad night flares.

Effexor (150-225 mg ) felt very similar – I think it too offered a gentle level of constriction. Taking it at morning seemed to help all day (not enough, but still helpful) I thought the link below was interesting

Hi everyone, Has anyone has any success with the serotonin reuptake treatment option?. As you know i am trialing sodium channel blockers and seeing subtle changes especially in cramps. As the 2 are compatible I have decided to also start SNRI therapy taking Venlafaxine(Effexor) at 75 mg day increasing up to 375 mg day. Be interesting to hear your experiences or views. Lets keep sharing and moving forward God bless mads Serotonin/Norepinephrine Reuptake Inhibitors (SNRIs) SNRIs increase se…

“The pathogenesis of primary erythromelalgia is not known for
certain, but histologic studies of affected skin show evidence of
decreased sympathetic innervation and deficient sympathetic
regulation. By inhibiting norepinephrine reuptake, venlafaxine may
address those defects”

When I transitioned off effexor onto zoloft (effexor contributed to heart racing for me, and I wasn’t aware of how much it was helping me) it was like 10 steps backward. Scary blood pooling unless I was constantly elevating. I noticed the same when I transitioned from cymbalta to paxil.

I think effexor might (?) provide slightly more blood vessel control than cymbalta, but cymbalta helps more with the nerve pain, given the same level of skin hotness imo. I currently take 70 mg cymbalta in the morning definitely feel it kicking in during the day. I need more help but personally I am so much worse without an SNRI.

In case that helps anyone!