EM, Raynauds, or Neither?

Hello all, (pictures are at the bottom. The lighting makes it look way less red.)

This is my first post so bare with me. I am currently 21 years old and started to experience consistent severe flushing in my feet, hands, and face when i was 18. Looking at pictures of when i was young i sometimes had a flushed complexion but nowhere near as severe. I remember the first flush ever was during a course of doxyclyine for Lyme Disease when i was 16. I started noticing flushing during my sophomore year of college when my face and feet would burn during alcohol consumption, but at the time i thought it was just due to vasodilation. I had my first severe episode that covered my face, neck, feet, and hands that year when i was doxy again.

At that point it was on and off but at least somewhat manageable. Also during that year i was diagnosed with IBS. My sophomore year summer (age 19) i started Accutane for my acne and the flushing got way worse. I stopped the treatment after 3 months. I went through my Junior year in pain and misery, i had no idea what was wrong. At first i thought i just had rosacea but that wouldn’t explain the severe 3 hour long flushes and it definitely wouldn’t explain the swelling hands and feet. I went to a doctor and was diagnosed with generalized anxiety and we tried Citalopram (SSRI) and propranool (low dose) and later Mirtazapine( helped a little a best) to try and combat the flushing but none of it truly helped .

Fast forwarding to now. Currently, I am not on any medication (probiotic once a day and fiber supplement) I haven’t had a drink of alcohol in a year, i do not lift weights anymore, and i avoid any temperature triggers. I had a colonoscopy and a full blood panel to make sure it wasn’t Chrons or Carcinoid. Im fully Paleo with the exception of white rice. I do have thrombocytopenia, an unknown autoimmune disorder, and low blood pressure (I see a hematologist once a month). These conditions started around the same time flushing got worse. Whenever my stomach is upset the flushing is worse (i do not eat any spicy, high histamine foods, and i do not believe it is an allergy considering i don’t have any true signs). I saw a rheumatolgist he thought it may be EM. My hematologist isn’t sure but wants me to see a vascular specialist. I have an appt with a well known physician who actually deals with EM patients and specializes in peripheral vascular disorders,

Symptoms: flushing and minor swelling of hands and feet. Flushing and burning of face for up to 3-4 hours when severe. When i do flush it feels like pressure building up and sometimes my heart will palpate even in times of zero stress. Worse with weight lifting, anxiety/stress, and temperature changes. My hands and face (nose especially) are just as bad in the heat as they are in the severe cold. If im too cold for extended periods my body will almost shake and erupt in blood flow resulting in severe hotness. I cant sleep sometimes because of it, and i wake up every morning with swollen feet.

Finally, im a pre-nursing student who has done tons and tons of research on the topic so i have a good background in medical terminology and function. It just sucks not knowing but i know i will soon. I just want to hear your guys feedback and any suggestions when talking to the doctor for treatment. I heard Lyrica is good for many. (final note: no family history)

I included pictures: Its hard to tell the severity but i do get minor swelling (i know i am not a severe case as many suffer from massive edema). 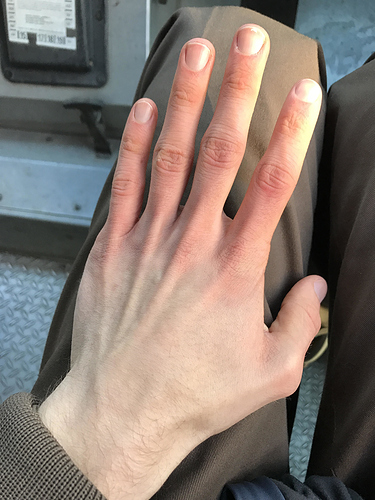 Hard to see because it was bright outside and i was in a car but my hands are very red and puffy in that pic. 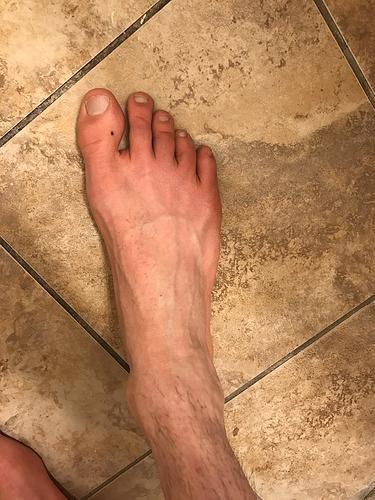 Again hard to tell, but my feet after a run and a cool shower. My feet tend to swell the worse. The last time i had half a beer, they became swollen.

Hmm that is sort of for me but I have it worse in my hands and the feet no so bad. My feet just the toes are red like here just your fingers are red.

I’m glad you’ve got an appointment coming up and I hope you get solid answers. Your pics look like EM to me. I’ve read everything I could on this site and started treating myself with what I considered the least drastic measures. Started with vitamin supplements and trying to be patient to give each one time to kick in and see if it makes a difference. I’ve been fortunate to have had some relief from the heat with the supplements. I will avoid pharmaceutical grade meds as long as I am able. Because of that, I’ve been looking on line for non-traditional treatment methods as well. Speaking of that-was wondering if anyone has tried ‘grounding’ or had any luck with Himalayan salt blocks for the feet. Here’s to a flare free day everyone!

Any updates or improvements?

Thanks please let us know