Hello Everyone! I’m glad I found this group since my extremities seem to have a unique talent of sorts—one I would really like to know more about.

I have a strong belief that I have both Raynaud’s & EM. I recently met with a rheumatologist for the first time and he has seen 3 cases of EM. Based on the symptoms and photo evidence, he basically concluded that I do have both & ordered a ton lab-work. Yesterday I had 20 vials of blood drawn & boy was it fun, since I am a known fainter when if comes to needles!

My question is, has anyone every been diagnosed with a condition that causes both Raynaud’s + EM?

I typically have Raynaud’s in the morning or whenever I touch something cold which tends to trigger an attack. The EM flares typically happen in the late part of the day & evening. Running my feet or hands under cold water makes it abate.

Here are a few photos of the opposites in action. 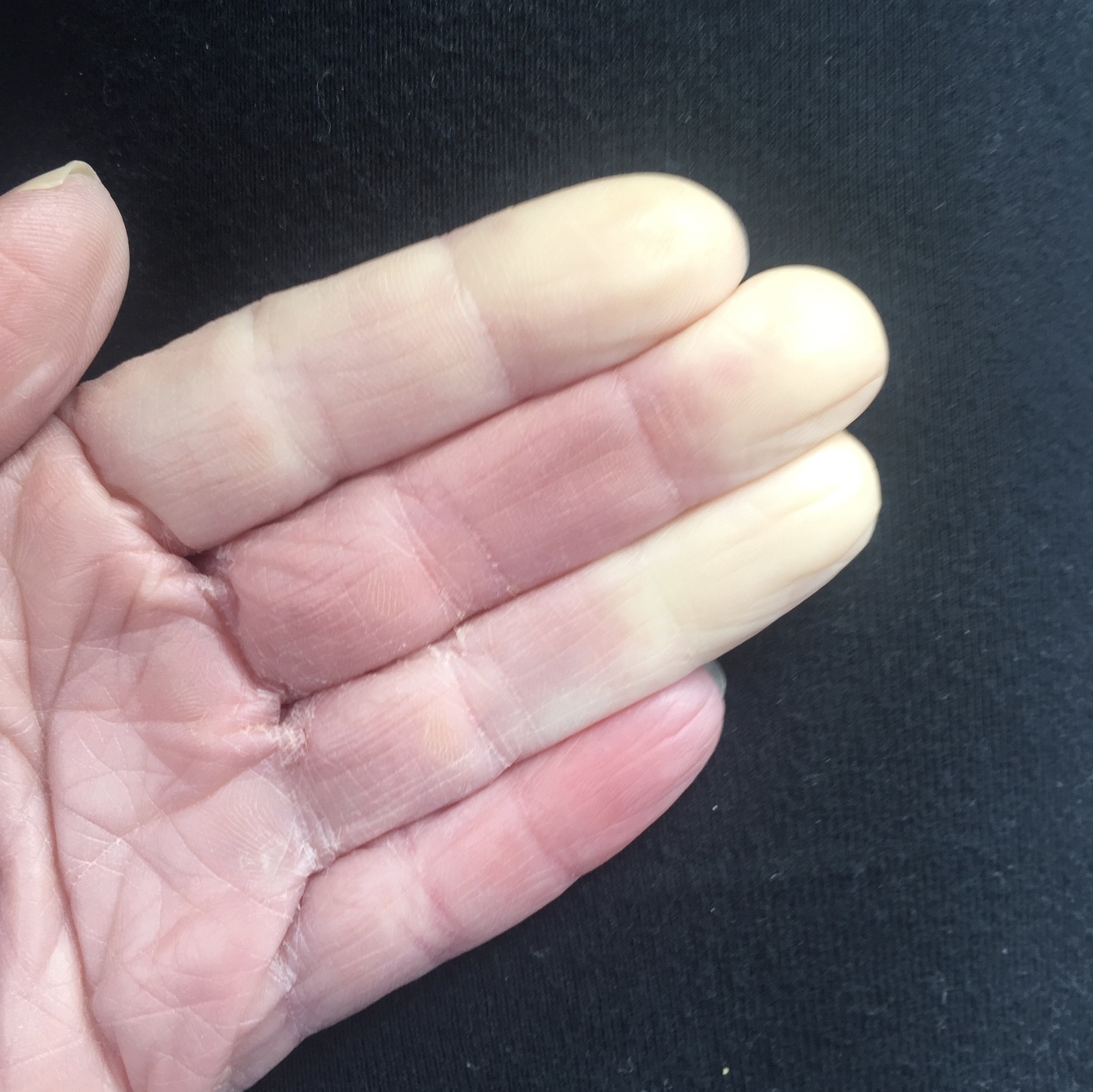 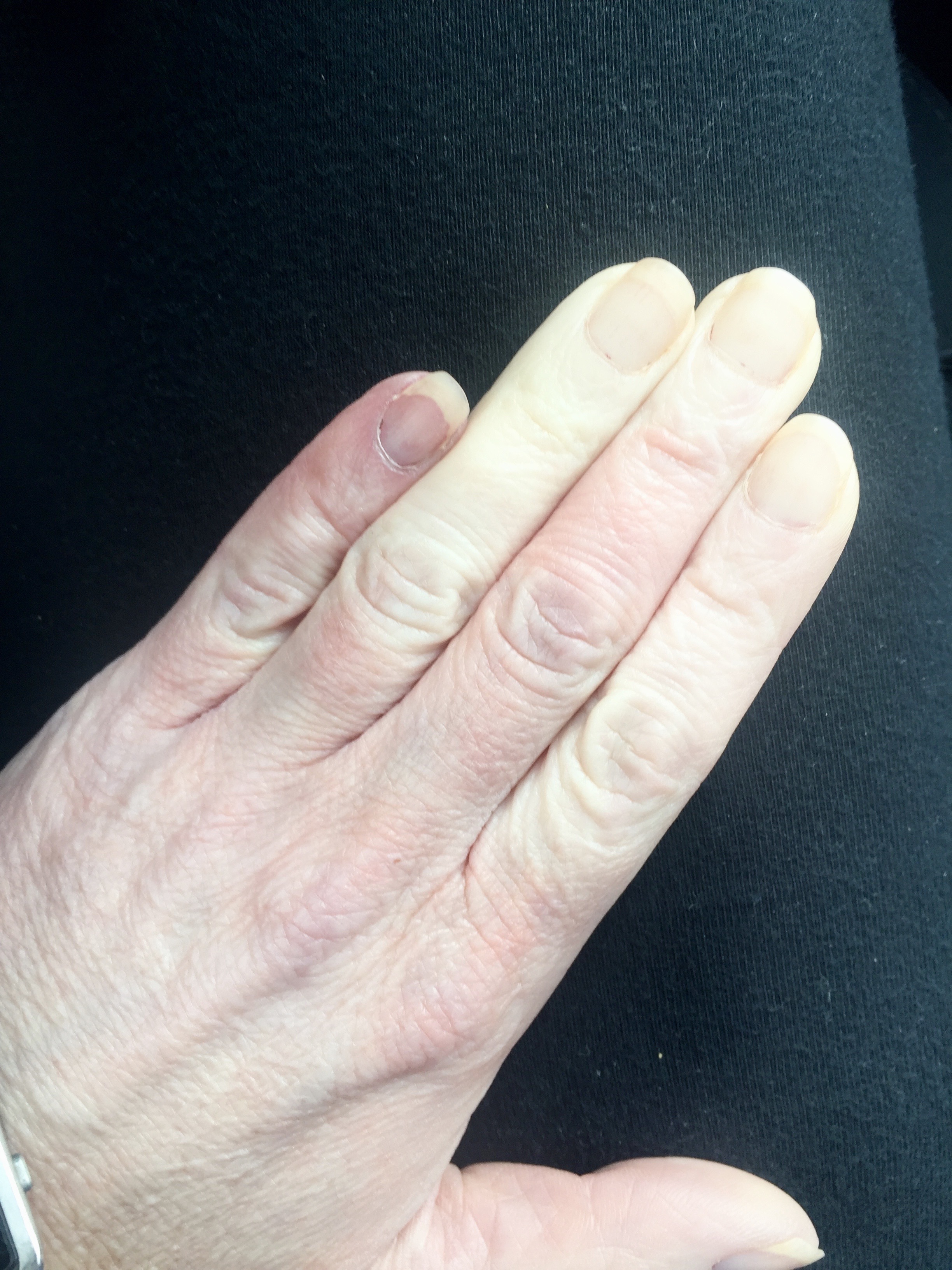 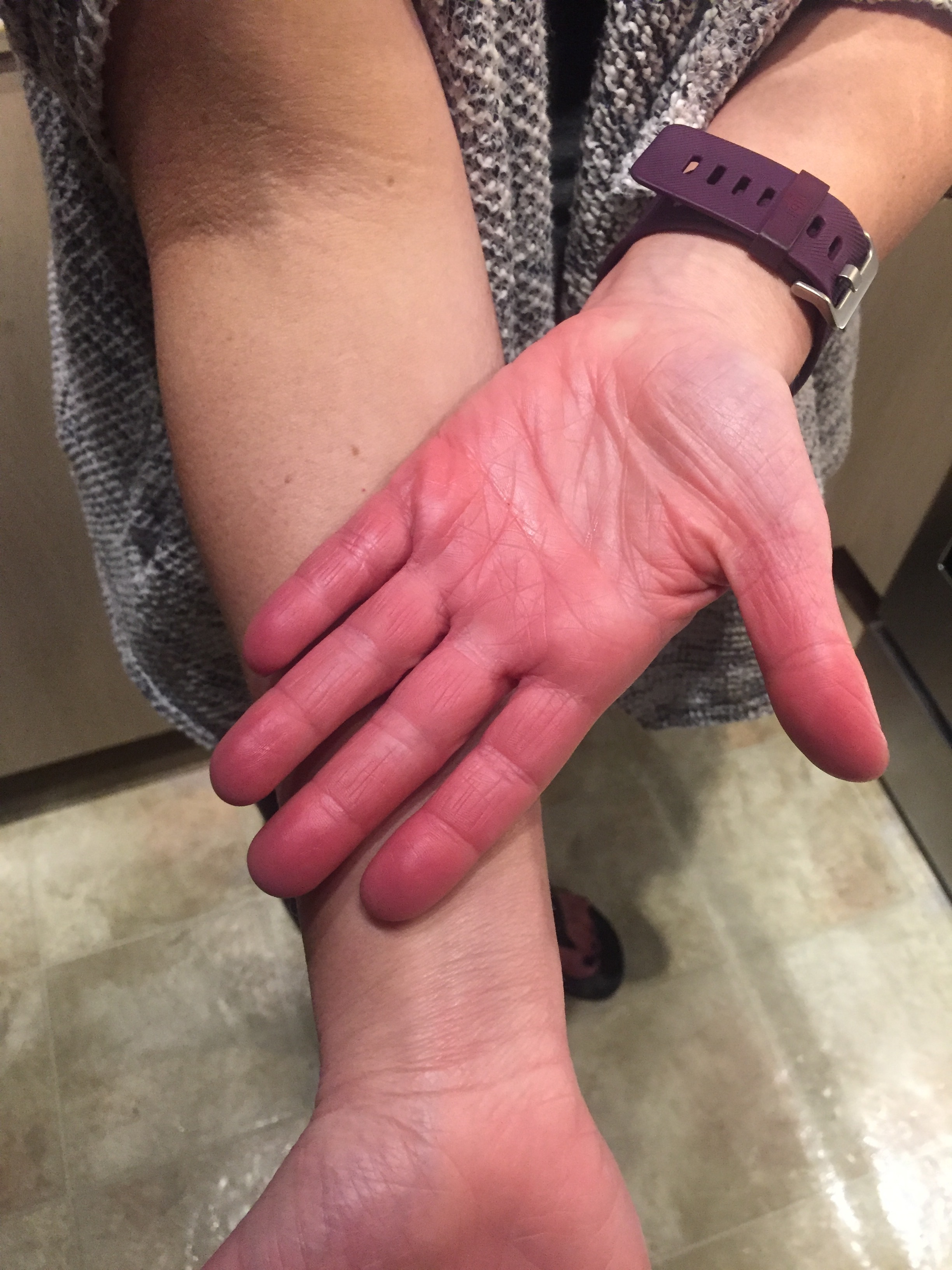 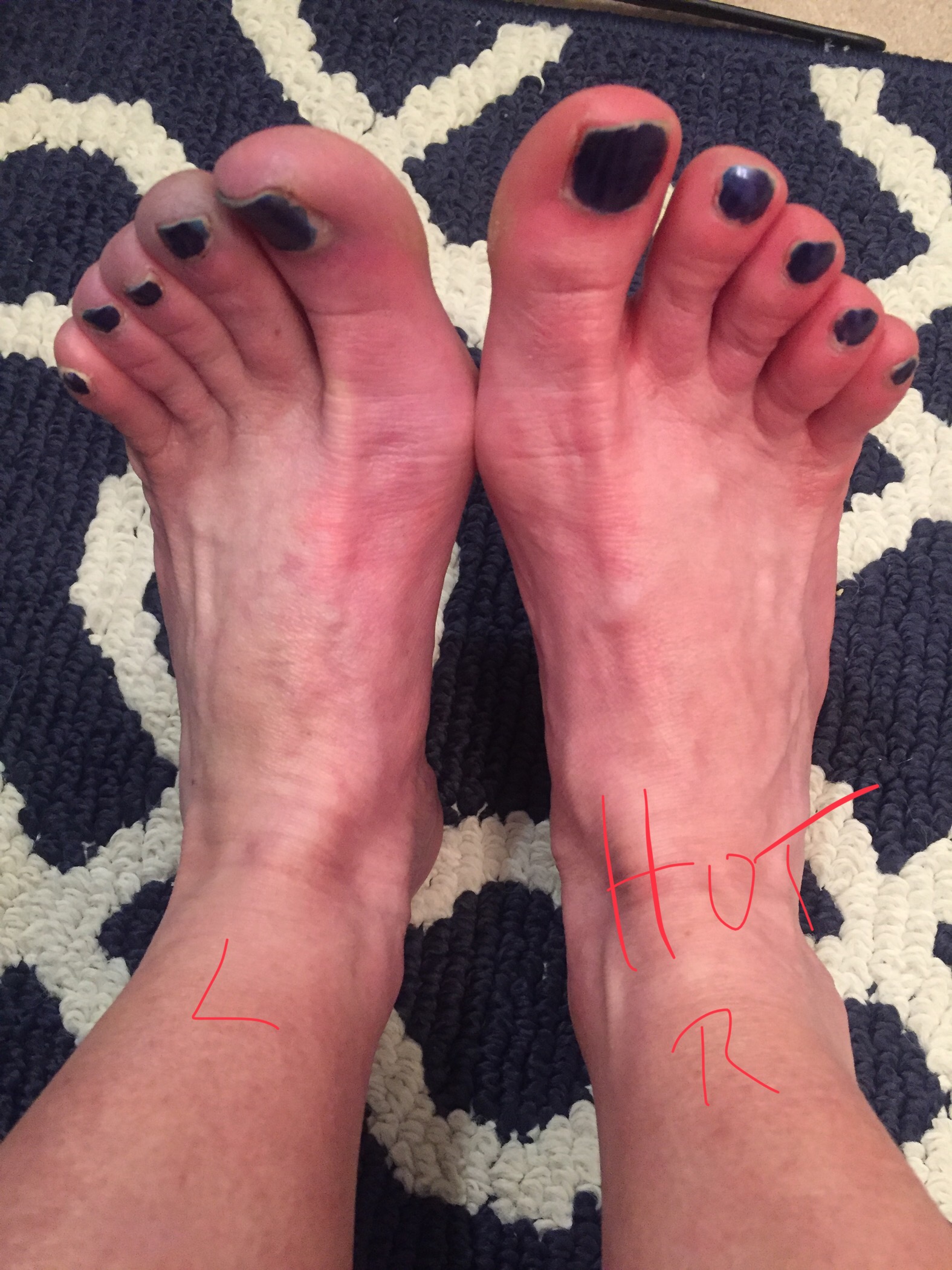 How do you know you don’t just have Raynaud’s, the burning redness at night a reactive flare on account of nighttime parasympathetic nervous system activation when blood vessels naturally dilate? Blood returning to hypoxic tissue will create a burning redness. (Illustrated below) 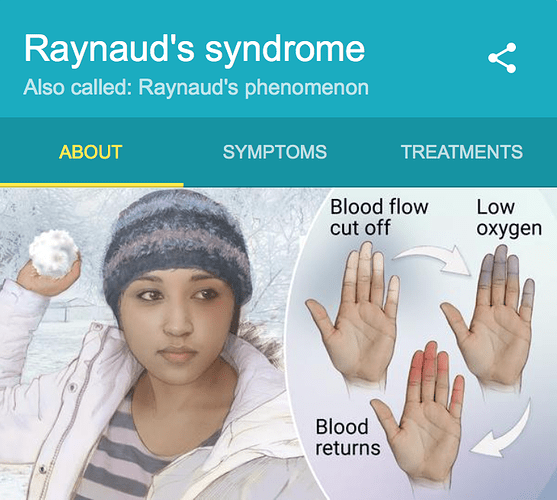 I’m not sure if this is the case? There is quite a bit of time in-between, plus the hot flares happen every day—mostly later in the day but not always—the Raynaud’s attacks are periodic. Just vacuuming activity will cause my hands to flare & I typically vacuum on Saturday mornings.

Because both conditions share similar characteristics and there are insufficient diagnostic tests to confirm the observational diagnoses, I don’t think anyone can say with certainty both conditions exist within the same individual. For instance, my EM affected areas are often ice cold. I don’t think I have Raynaud’s.

Many users here think they have both EM and Raynaud’s. I’m skeptical.

I have EXACTLY what you describe. My fingers and toes turn blue/white when cold, but in warm environments or after activity they are fire red and burning… and a bit swollen with puffy veins. I saw my rheumatologist today (I have infamatory arthritis and celiac) and both he and the NP commented on my blue toes and said it was definitely Raynaud’s. I then described my “hot” feet he said that could be EM. He never told me what to do for it though, or what type of doctor to see. He did say that the Raynaud’s is a vascular issue secondary to my other autoimmune diseases. My body is just messed up… it hates both cold and hot environments. And it hates exercise/strenuous activity.

I have both! Sometimes at the same time! That was the case when I went to see the Vascular Specialist! He was amazed! Not many people have them act out at the same time…my feet were deep purple/gray my legs splotches and my hands were fire red and hot! My arms were splotches too! So you can have both and even at the same time.

I’ve wondered something similar. However I would guess that if an issue was “just” raynaud’s, it could be treated more often than not with nifedipine, viagra, or another vasodilator. From reading around though it seems that relief via these meds in the EM world (or, when a patient or doctor thinks it is EM) is more of the exception than the norm. I know Jay Cohen estimated something like 30% get relief – my guess is it is quite less though.

In EM, one model that I read about from Mayo is that there is a maldistribution of O2 + blood in the skin. We get skin hypoxia because not enough blood is going into the nutritional capillaries. More and more blood gets sent to the area, only to be shunted away, causing some kind of “vicious cycle” where we get hot skin, locally high metabolism – I don’t really understand this exactly lol but my sense is there is an inordinate amount of time spent burning in EM (it seems until the body cools down on its own or otherwise) whereas in raynaud’s, the area would have been satisfied faster with the rewarming efforts.

I don’t think I technically have Raynaud’s either. At least, I don’t have the blue / white coloring that I see in pictures. It wasn’t until I began reading papers + paying attn to my flaring did I notice my extremities are a bit cold when they are not flaring – I wonder if there is a significant difference is between “officially” having raynaud’s vs. sometimes feeling cold, and how much of a spectrum it is. I do know there are people who think they “just” have raynaud’s (and have never heard of EM) whose fingers burn every night for example, but my understanding is that strong vasodilators are helpful in making them less sensitive to cold – whereas in EM they might not correct the underlying maldistribution of blood and O2 tension.

That said, females have Raynaud’s more often males, but I’ve read in a paper that EM does not have a gender preference. My sense from EM groups though is that there are more females than males though, and females are the ones that tend to find coexisting Raynaud’s + EM. I wonder about the claim EM does not have a gender preference – I would think estrogen could amplify cases that would otherwise be subclinical (eg my dad and brother have EM symptoms / nightly flares, but they are much less intense than mine).

Yes I have both Raynaud’s and EM. One year ago I uncovered the underlying cause: Lyme disease. The tests for it are terrible, especially the ELISA that most doctors rely on. Our own CDC has done a shamefully poor job of recognizing and specifying treatment for chronic Lyme (they don’t believe it exists at all). When I finally figured out what was wrong, I was pretty darn sick with lots of bizarre symptoms in addition to the EM and Raynaud’s. I had dysautonomia (low BP, lower than normal body temp, when standing got very faint and my heart would race, intolerance to heat and cold), migrating pain, felt like I was walking on glass shards, back problems, nausea and diarrhea, anxiety, malaise, extreme fatigue, brain fog, night sweats, insomnia, and more. I had to find a Lyme literate doctor to help. She ran more sensitive tests (IGeneX Western Blot, CD57) which showed I had Lyme. I’ve been on various antibiotics for a year and am slowly getting better.

You may not have even noticed a tick bite, only around half ever see a bull’s eye rash. Nymph ticks are about the size of a poppy seed so it’s easy to miss. Unfortunately our entire traditional medical system is in denial about chronic Lyme so the only way to get help is to find a Lyme literate doctor. Don’t delay, it just gets worse over time. I didn’t know what it was until I got so sick I couldn’t stand up and in a wheelchair. I’d been to Mayo and Stanford, all they did was give names to my symptoms.

You MUST find an LLMD to help. I can’t stress this enough - don’t bother with infectious diseases doctors, neurologists, GPs, etc. as they are not very well educated about this nasty disease. Very few LLMDs take insurance because they risk losing their medical licenses because insurers have taken them to court for use of long term antibiotics.

Are you still dealing with EM symptoms? Has there been any improvements as far as EM? Are you on lyme treatment aswell as EM medication to control flares ?

EM isn’t as bad nor painful. My feet still turn red in a hot shower. At night I put them in a bucket of hot water, as hot as I can stand. That seems to be helping me in addition to the antibiotics for Lyme and co-infections.

I have Primary Antiphospholipid Syndrome, with Raynauds for 20+ years, and I also have concurrent Raynauds and EM: Raynauds has been flaring in my right hand whil EM has been flaring on my right foot and left hand, at the same time! Extremely bizarre, and it means they can’t treat either one with vaso-constrictors or -dilators because it will antagonize the other. So I’m on gabapentin and CBD at the moment, and they help the pain some. No one has explicitly said the APS is related (they haven’t seen EM before at my doctor’s practice), but EVERYTHING in my medical history is affected by it, so that is one suspect.