My name is Will. I just got diagnosed about a month ago . I have had some weird symptoms since November 2017 after a cat bite on ankle. I noticed after showers my feet would get red . No pain just a swollen feeling. I ignored it. My cat bite healed fast. The redness persisted . I then injured my ankle in febuary2018 and still had this intermittent redness. I think I had the redness for years especially after a hot shower or long walks my feet would feel warm. Sometimes it just seemed normal . Then I started getting some nerve pain and redness . Mainly just tingling . My hands have flared too. The hand flares are worse than feet but color changes in feet are much more pronounced . I’m work in radiology in medical field and started reading in our library. With in 24hrs I was convinced I had EM . Went to a rheumatology appointment for joint pain and all lab work was looking good . He looked at some pics on my phone and confirmed what I already had know . I’m on aspirin and antihistamines which is only helping slightly. My hands don’t like the hot weather and blood pools in them frequently leaving them feeling full. Pressure friction and heat will cause small flares for me . I was using ice fore my ankle tendonitis which is what I believe started my flaring and increased my symptoms . I no longer ice . I also wear socks and shoes and try to keep them on during flares .
I also started mr prowess book on Erythromelalgia . His protocol involves heat desensitation and pepper cream. I don’t think it’s working for me as I have never tried to cool my extremities anyway. I get hot showers and always use heat on the feet in car. This was even before I knew I had EM. I may continue his protocol but the pepper creamcaused a flare so bad I can to dunk feet in cold water. It was the worst pain I have ever felt . I most called 911. The. My feet were very sensitive to heat for 3 days and back to baseline. I have put pepper cream on hands and that was not nearly as bad. I got some relief but the weather has been all over the place in Philadelphia . So who knows
Anyway I’m still working and taking care of my kids . 9mo th old and 2.5yr old. My wife has been great .

I think I had EM for a while possibly years. I used to have redness in hands when working in yard or grilling food. I can remember hands getting irritated working on cars too. I also remember small symptoms in my feet like heat and itching. It is hard to say whether it was EM or just normal people symptoms. I never thought anything of it untill recently when my symptoms began causes serious pain and I just knew somthing was wrong. My rheumatology doctor was not much help. He only treated about 15 patients in 30 years and only used aspirin and benydryl
I’m headed to my primary tomarrow and I see a specialist in autonomic nervous system function and is experienced in EM . That’s in June. Untill then I just keep at it. If anyone knows good EM doctors in philly feel free to comment.
My future plans are to explore some creams and possibly mexelitine and whatever this new cardiologist recommend
hope you all are well . 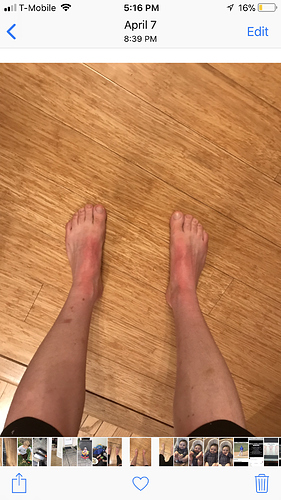 Hi I am in Phila area too. Who will you see in June? I am trying modified Bob’s protocol with heating pads. Have you tried?

I have used enough heat that it probly won’t work for me . I take two hot baths a day wear gloves . Use heat on feet in car and do hot pepper treatments . I also walk with wool socks on . Not giving it up but some people won’t respond to heat therapy. There are to many kinds of em and causes to kno until u try .

I recomend getting bloodwork done

To rule out any secondary cause of em

The doctor I am seeing is 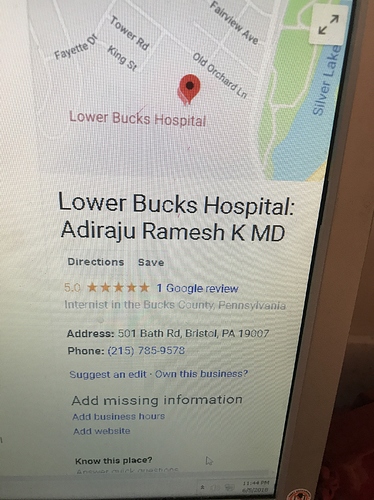 How did you find this dr may I ask

Have you seen anyone else?

I don’t know if you have read my Low Dose Naltrexone posts, it has changed my Daughters life. We tried many things and after taking LDN for six weeks the change was incredible.

I found the doctor online and called . His specialty is autonomic dysfunctions. He has seen and manages many people with em. Even the receptionist knows what it is lol.

I have seen a rheumatologist and I am also going to be seeing a hematologist.

All my labs are good .

It’s not really working but compared to many mine is mild and slowly seems to be getting worse . I just found out I had it in April but maybe had some symtoms for a while .

Hi Will. Your EM could be a symptom of Lyme disease, that’s what caused mine. The cat bite may have given you Bartonella, many cats carry the bacteria. Bartonella is also a common co-infection with Lyme. There are different strains of Bart, so the strain typically carried by cats isn’t necessarily the same strain as transmitted through insect bites.

My suggestion is to get tested for Lyme but avoid the ELISA. That test is very unreliable. False negatives are quite common, because the test measures antibodies and Lyme is immunosuppressive so there may not be enough antibodies present to trigger a response, particularly if a few months have passed since the original bite.

After ten years of symptoms, I found a Lyme literate doctor (LLMD) who ordered more sensitive tests from IGeneX. I had been tested twice in years past with the ELISA and both were negative. Yet my IGeneX IgM was CDC positive for Lyme borrelia. I had suffered unnecessarily for two more years just because of that useless ELISA test. I’ve been on antibiotic treatment for 15 months so far and am feeling a lot better though I still have some symptoms.

Lyme is particularly endemic in the Northeast (PA is the worst), upper Midwest, and northern California. Many never get a bull’s eye rash, I didn’t. The ticks that transmit Lyme are very tiny, about the size of a poppyseed, so you may never see them. And due to the politics of this disease, you absolutely have to see an LLMD as conventional doctors have very little training in Lyme.

I think I had symptoms before that bite. It was my own caT who was indoors it’s whole life. I had tests for lime and it was negative . I will check my lab work and see what labcorp used . I had some minor symtoms before but I really don’t know if it was EM I have always had pale sensitive skin that is irritated easily so who knows . I attached my lab below . But I think I’m good for Lyme. I am seeing hematology to ro blood issues . I will also ask them about Lyme and retesting al labs . I live in havertown pa . South west of philly like 20 min away. Anyway thanks for your reply. I’m using some lidocaine cream currently and a patch so if that helps I may go try mexiletine. I’m seeing a cardiologist who specializes in pots and seeing many patients with EM. It’s been a journey and I’m just getting started but again I may have had symtoms so mild for years that’s it is just now becoming a problem. Some of these symtoms are like dejavue 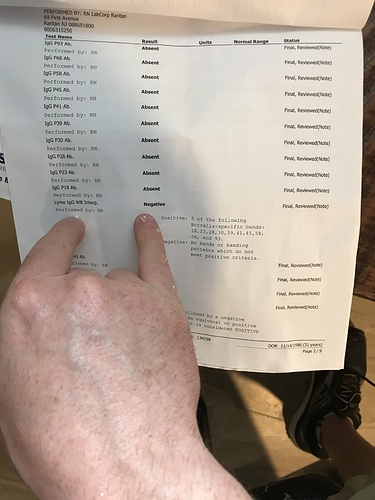 Did you have an IgM test as well? My IGeneX IgG was negative, only the IgM was positive. Even the better tests like IGeneX aren’t perfect. Also, there are different strains of Lyme Borrelia and a tests is only for a specific strain. My LLMD ordered tests for both B. burgdorferi and B. miyamotoi. An experienced LLMD can lso diagnose on symptoms, since they know the tests aren’t infallible.

Do you have other symptoms? Besides foot pain and EM, over the years I had insomnia, night sweats, tachycardia, weight loss, IBS and diarrhea, arthritis in my ankles and spine, disc bulges, low vitamin D and B12, hair loss, moodiness and depression, fatigue, loss of ability to sweat, ringing ears, dizziness, vision problems, sensitivity to some drugs, food sensitivities, orthostatic intolerance (dysautonmia/POTS), sensitivity to light and heat, and more. Some of those symptoms I had early on, such as night sweats, insomnia, and dizziness, and were attributed to women’s health issues. Eventually my symptoms progressed so I could barely stand up and I was diagnosed with pure autonomic failure at Stanford in August 2016. But I knew inside there had to be a reason behind it and finally I figured it out with the help of a couple of friends. These infections are slow growing so it can take years for some symptoms to develop.

No other symtoms. On EM and a few sports injuries . Sleep like a baby when EM cooperates too. Just EM that has hit me all of a sudden. Last summer I had symtoms and didn’t know it . Working in heat hands would be irritated and red I would wash with cold water and it felt so good then I just went about my day. Over the years I have had some hot feet here and there and even redness at times . Never even gave it the time of day until now. My most recent ankle injury I cracked my distal Tibial plafond and seems to have caused a rapid onset of symtoms. .

My symptoms accelerated after I had foot surgery for a neuroma in mid-2014. It’s common for Lyme to worsen after some sort of stress such as surgery, change in family situation, job change, etc.

Just keep in mind that it might be Lyme. I wish someone had mentioned it to me before my symptoms got really bad.

I knew about Lyme but I have already been tested.

Is there another blood test u recomend and who orders it ?

Also I have no symtoms of Lyme only EM . I have no symtoms of any other disease except for the EM . All rheumatology screens were negative too . My only abnormal lab work is a high ana titer which was further tested and non specific so clinically insignificant. I will get retested in 6 months but they could not find any specifics to the Ana which was good news .

Hi,
Can I please email you privately as I have a friend who has no diagnoses after 3 or 4 years and her symptoms sound like yours.

Could I pass your mail on regarding the tests done and the info about the cats. My friend used to have a cattery and breed Siamese cats. She is much worse than me doesn’t have EM but has something that affects her speech, walking and talking. Here in NZ they say we don’t have Lyme’s disease but I think it wouldn’t hurt to do the test. Maybe a bit more information might make her think about insisting for more tests.

She is such a lovely lady and doesn’t deserve to have whatever she has got.

Hope to hear from you soon.

How is ur EM doing? Found any meds that help?

Can u send me your email. Or cell and I can text. It’s blocking my email from showing

I am not very good on the computer I tried but didn’t get anywhere, so are you able to email me please. It would be good to chat.

Sorry to be a pain.