Not an EM diagnosis yet curious about aspirin

I started having problems with my feet first in 2014 and I told my neurologist that they were really red and hot/burning after being outside or a hot shower. I explained that I couldn’t stand on them and had to sit down. He said everyone’s feet turn red after a shower. As the summer ended I had started taking carbamazepine and didn’t notice it as much. This year it started a few months ago when the temperature started warming unseasonably. It is back with a vengeance (hands and feet)and a couple of doctors didn’t have a clue what they were looking at. I did my own research and went to a dermatologist. She immediately seemed to recognize but not name it. She started me on aspirin to see if it helped and checked my blood work. I go back in 6wks and I was wondering…isn’t better if the aspirin doesn’t make it better? I thought I read that improvement was a hint toward myeloprolific disorders. 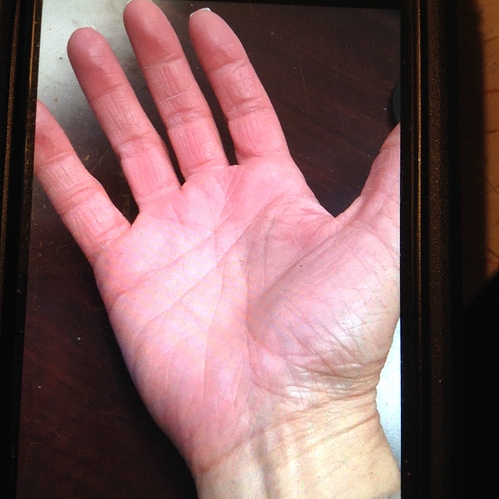 Hi all, Just wanted share a good note and a tip for aspirin... I was diagnosed 2 years ago, and started baby aspirin after I started to feel like I couldn't do many activities I loved. I was having trouble walking the dog... my feet would feel a deep ache, swell, and have a cramp-like feeling. I couldn't run at all. I would stand in the creek to try to cool them off. After a day rock climbing, my hands would burn and tingle all evening/night, making it impossible to sleep. Etc. I'd been in tears…

Erythromelalgia is a rare neurovascular pain syndrome characterized by a triad of redness, increased temperature, and burning pain primarily in the extremities. Erythromelalgia can present as a primary or secondary form, and secondary erythromelalgia...

a month after aspirin medication and chemotherapy. The temperature in the affected areas decreased…

The symptom of secondary erythromelalgia with myeloproliferative disorders, such as essential thrombocytosis can be alleviated with aspirin as in this case"

Does your entire hand (fingers,thumb and palm) burn?

“Monofilament testing was normal. Laboratory studies showed normal white blood cell and platelet count with an elevated international normalized ratio (INR). Initial differential diagnosis including cellulitis and arterial or venous insufficiency were systematically excluded. A presumptive diagnosis of erythromelalgia was made taking into account that she fulfills all of the Thompsons’s criteria. Aspirin 325 mg was initiated. The patient showed significant improvement in her symptoms within 24 hours of initiation of aspirin therapy (Figure 2), her pain and redness came down significantly from 10/10 to 3/10, both upon ambulation and with rise in room temperature, she was able to walk pain-free for the first time in 2 weeks. However, the erythema and redness persisted for some time. After a followup of two weeks, her symptoms completely resolved and she was advised to continue taking the aspirin.”

Yes my entire hand burns but the fingertips throb and feel swollen as well. The soles of my feet, my toes, and up my heel about an inch and a half burn but my toes are the worst. The doctor said I also have significant blanching.

^“we diagnosed the lesion as erythromelalgia. Since the common treatment of erythromelalgia is oral aspirin, we treated him aspirin 162 mg daily. Surprisingly, the pain and erythema of palms suddenly subsided within 12 hours”

^According to Dr. Cohen (EM Dr and patient)
Aspirin (ASA)
ASA can be rapidly effective for EM secondary to blood disorders (polycythemia, thrombocythemia, leukemia). Otherwise, it is infrequently helpful in EM. ASA dosages should be gradually increased up to 650 mg four times daily, if necessary. Side effects such as gastritis or ulcers can occur.

Have you experienced any relief with your aspirin dosage?

It seems as though the pain has decreased slghtly but the red has stayed. Hard to say if the low dose aspirin is helping. I realized that I had several variables that may or may not have an effect. I switched from gabapentin to Lyrica, I had several trigger point steroid injections last week and I added the aspirin. The steroid injections really flipped a switch with flushing all over. I should know about the aspirin within a few weeks as the temperature really warms up. Thanks for asking. This is the most odd problem to have. Good to know there is a group of support here.

Also, I just realized the dosage. I am only taking one low dose daily.

I’m glad to hear your symptoms have decreased.

What steroids were injected?

I don’t recall the specific name.