Off topic but looking for answers with skin problem

I hope everyone is feeling ok today. This is (probably?) not related to EM, but I have been having these red bumps appear on my skin for months. They appear in groups or sometimes just a bump on its own (Like in the picture). If it is a group, it will often be in a row, and in this pattern:

I have had identical rows like this appear in multiple places on my body at once.

They occur every couple of weeks, although I did have several months in between outbreaks recently. They are itchy & slightly sore. Usually, they range between a half an inch to two inches in size. They have no entry point like a bite. When they fade after a week or so they turn to bruises, which then last for several weeks. They have occurred on my breasts, neck, shoulders, lower legs, stomach, back.

I did go to a doctor about them once, when I had three fairly large ones on my leg and a lone one on my stomach. She thought it was Erythema Nodosum and referred me to a dermatologist. By the time I got to the derm (a week later), they were just bruises and he said, "These are bruises. I can't diagnose a bruise." He said that he did not think it was Erythema Nodosum because that usually doesn't appear on upper body. And sent me home.

He made me feel like a hypochondriac so I have not sought out medical care since.

Has anyone experienced this? Or know what it might be? I feel like everyone is very educated about unusual medical problems on this forum so I trust you guys/girls!

Hi, I'm not a dermatologist and derm is not really a strong point for me, but the lesions you describe and depict resemble erythema multiforme to me. Maybe you can try googling that and see if it describes what you are experiencing.

Hi, I have never had anything similar to what you are experiencing but I have a good friend who gets something similar quite often. she has family members with histories of dermatitis herpeteformis (a form of celiac dz), and with psoriasis, but she has been told the lesions she gets are not from either. I am a pharmacist so I have friends and family who ask me to look up symptoms etc for them when they and their doctors cannot figure out (or dont take the time to figure out) what is going on, and her red spots look an awful lot like the ones characterized by erythema multiforme minor.

Anyway, I was looking up some info regarding the annular type lesions you describe and I found this description as well: erythema annular type

good luck and I hope you can figure something out. if you are not already taking vitamin d, and there is no reason you shouldn't be taking it, you might consider taking a daily supplement as often many skin disorders are improved by vitamin d3.

I got sent to dermatology and caused an immediate active flare up with heat(hot water) so they could take a biopsy - might be an idea. Ask to go back and cause a flare( do they appear with heat?) It- will give you some peace of mind at least.

Mads, I don't think it is related to flaring? Although it may relate to heat. I've never had it on hands or feet which is where I flare. Plus they last a long time, after flares have ended. I appreciate that advice though, thank you! :)

I'm still looking for answers on this, so I am bumping the thread. Thanks a lot :)

This is likely not the same thing you are experiencing, but I have had itchy red spots...

My EM on my toes began with itchy half-inch red spots that I initially thought were some kind of bite until a few more showed up and I saw that they were symmetrical. I guessed they were some kind of chilblains from my toes having gotten very cold that day, but they were very well-defined and round and they were intensely itchy and tender. Also unlike textbook chilblains, these spots took several months to go away (changed to purple then faded oh-so-slowly).

In the weeks following my initial cold exposure, the itching and redness spread to cover my toes and stayed that way for a couple of weeks, then settled into the hot triggered flares that I have had ever since (for a few years now). I have not had the itchy welts again. I was unable to ever get a diagnosis on them.

Thanks so much for your reply! I'm sorry that you experienced something so annoying. It sounds a little different from what I had, but also a little the same...the turning to purple and fading is exactly what happens to me. It seems like it should not be that hard to get a diagnosis about itchy spots but it really is! If you ever find out what they were, please let me know.

Here is another picture of another flares I've had. This is a photo of a photo, since the original is on an old phone. Excuse the shoddy quality! Maybe someone will know what they are. =/ There were actually two other spots in this flare, but the pictures didn't come out good.

It's driving me nuts not knowing! I also recently have developed a different type of "ring" rash on two areas of my torso, which I was told was eczema. This has been the year of the odd skin rashes for me. 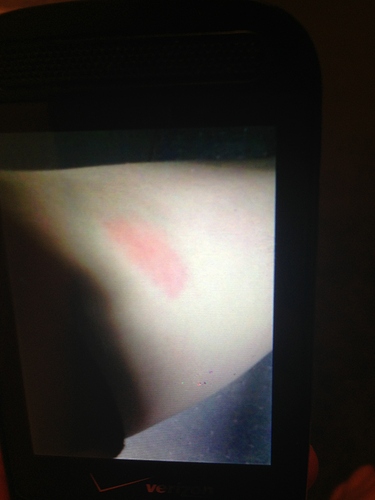