Physio recommended ice, shall I use it under her strict instructions.?

Hi, I have been referred to a physio for several reasons relating to my widespread chronic pain. The main reason being the pain I have suffered for about a year in my feet, the arches and heels. My dr thought possible plantar fascia and sent a referral to the physio (after jumping through hoops to prove I've tried all sorts of weird remedies). I had my first appointment at a private clinic because my local hospital couldn't get me in within the timescale needed. The physio looked up EM before my appointment and admitted she had never heard of it until the referral came through. She was very thorough, starting from the top and working down. She said that my left side is a lot weaker than my right, my back and neck injury has left limited movement in my neck. She noticed my arches are dropping and also my ankles are collapsing when standing and walking. After taping my feet 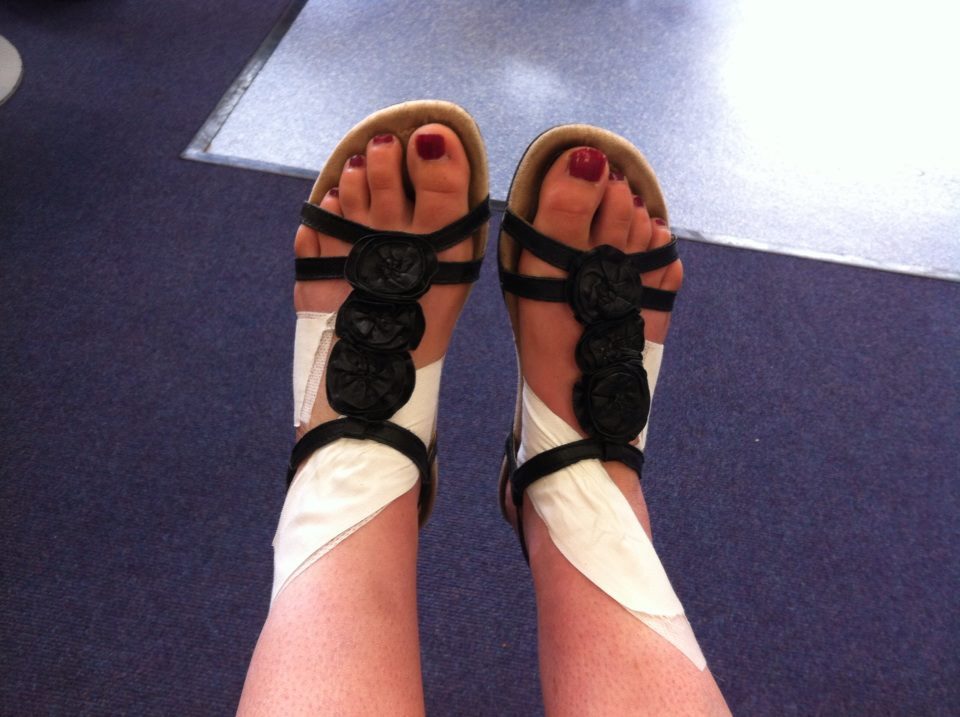 0b58cced47d8275bdb033da546973764f3d2e69e.jpg960×717 90.8 KB
and ankles to try to stop them dropping she gave me some exercises to do at home. The taping stopped me being able to straighten my feet and should've lasted 4 days but it only lasted a few hours tho because as soon as my feet flared the swelling and heat forced the sticky tape off.

One exercise involves freezing a water bottle and using it to roll my feet on to massage, lengthen/strenghten the muscles and also bring down the inflammation. I just used it for the first time and the cold felt great after a day on my feet in the 30 degrees sunshine.

I have read lots about not using ice because of the risk to nerves (I already have lots of nerve pain and really don't want it to get worse).

Would you use ice as part of a physiotherapy program.? I am unsure if it is the right thing to do.

I'll ask my dad, Laura. As you know, I'm now in a wheelchair, in constant pain and have major problems with the skin on my feet because of ice use. However, that is after using it for 16 hours a day and with extremely cold ice-packs.

My biggest concern with you is the risk of causing flares. The cold makes the blood vessels shut down but when the skin warms back up, the vessels go from completely closed to wide open, which causes a very painful flare. If the physio doesn't have experience with patients with EM, then she won't know if using the ice bottle would be a problem. She may even have thought that it was a good idea for a patient with burning feet.

Could you try using something that isn't cold, like the old trick of using a rolling pin? That way you're still doing the necessary physio exercises but avoiding any risk of affecting your EM. You could always pop the rolling pin in the fridge for a few minutes, that way it'll be cool but not cold. I wonder if the water bottle suggestion is simply something they know most people will have in the house, as fewer people have rolling pins. If my dad says that the ice bottle is a bad idea, then you could phone the physio and ask for a suggestion of what else you could use. You could also ask what to do about the taping, she may show you how to do it yourself.

I know what you mean about the bottle of ice feeling nice in the heat. It's been 30 degrees some days over the last two weeks and I thought I might catch fire! It didn't get below 26 degrees in my bedroom one night and I thought about crawling into the freezer. My fan died last week and I can't get a new one yet, as the ones I need are sold out!

Good luck with the exercises.

PS If there are any odd bits in this, my cat decided to lie on the laptop while I was typing the reply. Revenge for being taken to the vet today...

Hey thanks for the reply Star, great to have you back here...!!

I am seeing the physio again next week so if youir dad says that it's not a good idea then will give stop doing it. I have tried using a proper massage ball and rolling my feet on it for a while, tried heel cups, insoles with arch support, shoe inserts with anti shock absorbers the works over the last year and nothing has helped so far. The physio suggested ice but this will be a short term thing 10 minutes 3 times a day until I see somebody in biomechanics. It has got to the point where I am not coping at work on my feet all day, not only with the EM but with this too. (possibly due to fibro)

If it's not making you flare, then 10 minutes should be ok because you're under medical instructions. I will check with my dad but if it's helping, then I wouldn't worry. When I started getting nerve damage from the ice, the next day my foot would burn (in a way that felt different to my EM, it felt like it was on the surface rather than all through the foot). If you're not feeling anything like that or any other sensations that suggest the nerves have been damaged, then it's probably safe to do in the short term. Any signs or odd feelings, or if you find you get a flare after using the ice, I'd suggest you stop using it immediately and speak to your doctor.

*Note to other members - Never use ice except under medical instructions. Seriously. I could post photos of how awful my foot looks after using ice but I don't want to damage your computers because you throw up on them. While it's what everyone with EM feels they should do, using ice or water to relieve your pain is a very bad idea. I only used ice because my specialist, an expert on EM, said there was nothing else I could do. Unless you've been told that by a doctor who literally wrote the textbook on EM, don't do it!

Just to say I agree with Starsmurf . However desperate we are please avoid ice - ice water. That was the first thing my specialist advised me to stop doing - irreversible nerve damage.

Shout out to Laura. Laura you live in Norfolk dont you? I found a fantastic consultant specialist in Norfolk ,who firstly - diagnosed my EM, secondly - is amazingly proactive and compassionate -currently guinea piggying me on IV infusion. Have you ever been referred there? Called Bowthorpe community hospital. pain management centre - might be worth asking for 2nd opinion.

Thanks Star... I have only used the ice bottle for about 5 minutes today and will wait until You've spoken to your dad before using it for longer.!

Mads, I am under Dr Valentine at the pain management at the Bowthorpe Community hospital, also used to see a pain psychologist there, did ACT as well as mindfullness. Dr Valentine didn't know hardly anything about EM until I was referred to him but he's been great at researching and also finding EM specialist for me to see in London last year. I live about a 5 minute drive from there. Are you local to the pain clinic Mads.?