Is there anyone else here who has never had swelling as a feature of their erythromelalgia? No matter how red my knees have ever gotten, they have never swollen. In February, when my rheumatologist attempted to extract fluid from my knee to run tests, he could barely get any. (Because of that, it also hurt like crazy!)

I'm just wondering if it's unique to never have swelling. I'm including a picture from June. As you can see, my knees are quite red. However, they're not swollen at all.

I'd love to hear others experiences regarding swelling. Thanks! 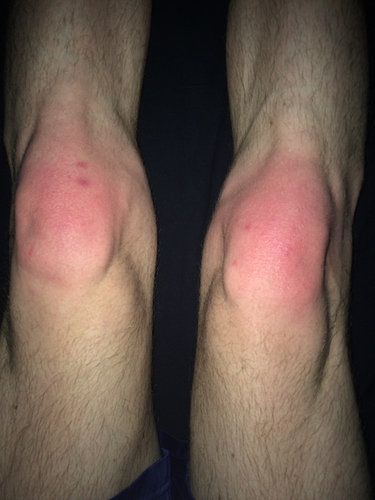 Carter I’ve never had swelling. But maybe it’s because I’ve only had obvious EM since last March or April. I seem to have every other symptom though. The speed with which my EM has evolved & spread, though, I won’t be surprised to see swelling one day soon.
Beth

I have never had swelling too. But like Beth, I have EM since 1 year.

No swelling for me either, other than the foot that had surgery 1-1/2 years ago is still a bit swollen. I've had EM since around February 2014.

Interesting. So maybe it's not unique or not unique in the first few years after onset.

For those of us without swelling, is the pain superficial (like a sunburn) or deep (like joint pain)?

Superficial but excruciating. Burning with a bee sting sensation all over.
Beth

Superficial, like a sunburn. I do have joint pain in the balls of my feet, x-rays showed arthritis so I don't believe it is the EM.

Have any of you noticed a food trigger that worsens your symptoms? I'm investigating this possibility as I have some really bad days and all I can think of is it was something I ate.

I diverge from the group on this point. That's not how I would describe my pain. There is a superficial burning, but it's more modest. I wouldn't describe it as a bee sting. What was limiting my activities earlier this year was not so much the superficial pain, but something deep. I had a bone crushing pressure. It felt like it was within the knee, not at the surface. When it first happened, I said it felt like someone had taken a sledgehammer to both knees. It was painful just to stand. When I tried to walk, it felt like there was an erratic stabbing pain. Sometimes I described it as walking on stilts, like it was bone on bone with no shock absorption. (Note: I had multiple x-rays and 2 MRI's, both showed normal spacing and cartilage for my age.) When the deep pain and the superficial flaring existed simultaneously, that was when I was at my worst.

It sounds like i'm describing something different, but it could just be the difference between having it in your feet versus the knees.

I initially thought my flaring was influenced by food, but could never find any reliable correlation to a specific item. I think variations in symptoms could be due to hormonal changes.

Your case sounds so similar to mine. Here are my knees. They started getting warm and red before my feet and hands.
I wonder if Mexiletine could help me. 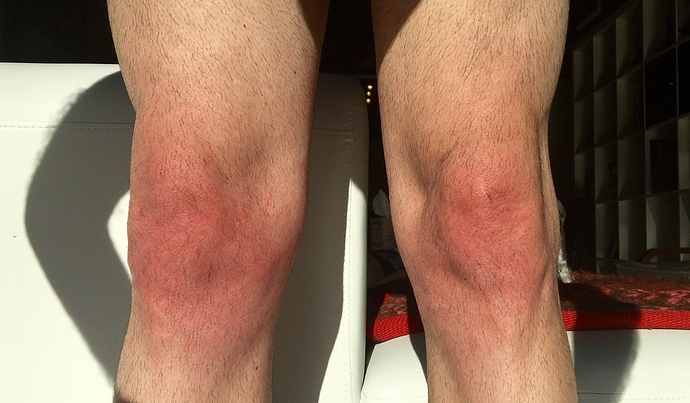 An here they are without symptoms. As you can see the difference is notorious 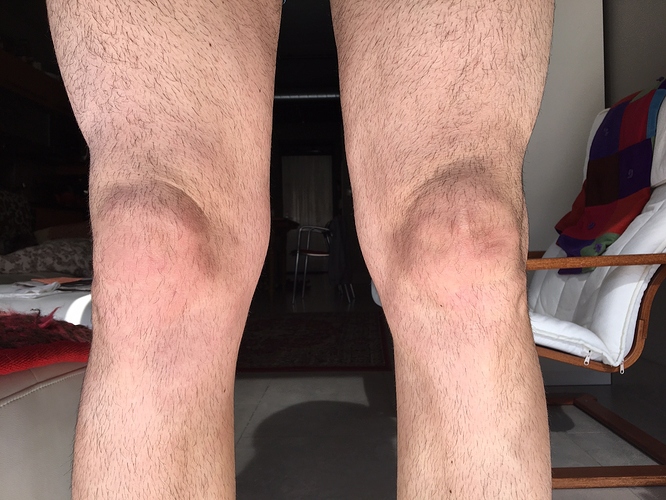 Both pictures where taken the same day. The first one, with the knees red and swollen, after a 15 min. walk in July. The other one, after resting and icing them.

Yep. That looks almost identical to what my knees looked like.

Thanks for the answer, Carter.
I’ll look into mexiletine and propranolol to see if any doctor could prescribe them to me on a rial/error basis here in Spain.
It may be the case we are on the same Erythromelalgia casuistic.

Ive has it for 4 years and at first my knees used to burn whenever an attack was coming and the legs and feet were very sore, but no swelling and I had days when my legs were cool at long periods, but not now. My feet and legs are so swollen now that I wear EEEEE width sandals when I have to go out and my feet are blue when cold and fiery red when hot, which is most of the time. Until I take my meds, I have tingling, stabbing pain and sunburn - like pain after I do and I need freeze mats wherever I go and lidocaine cream when I can’t stand the aching pain.

I feel I should point out this is an old post. I wrote it 4 years ago. I did not have an insidious disease progression. I had rapid, explosive onset. My symptoms are well controlled with medication and what remains has been on a slow, years long ebb.

Hi, i know this is an old post but Lynne, what you described is exactly what I have, i didn’t understand the swelling with the flare ups and pain but now my suspicions have been confirmed.